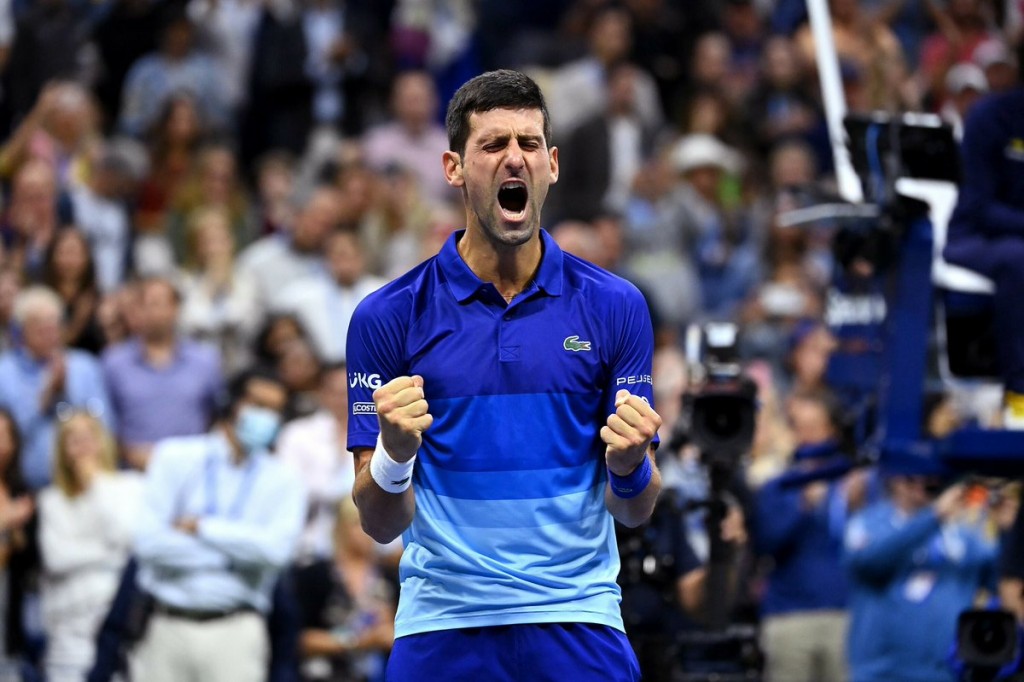 BY THE TIME NOVAK DJOKOVIC LOST THE BIGGEST MATCH OF HIS CAREER, HE’D ALREADY WON OVER THE BIGGEST AUDIENCE OF HIS LIFE

Daniil Medvedev was the first player at a major in 2021 who didn’t bend to the Serbian’s will. On the Russian’s Slam-stopping win, and Djokovic’s bittersweet night in seeing his calendar-year Grand Slam bid ended.

The pattern for Novak Djokovic had been set in stone over his first six matches at the US Open. He would lose the first set, break serve right away in the second, and impose his will from there.

By the time the final against Daniil Medvedev rolled around, Djokovic seemed as if he was trying to make that exact scenario happen one more time. He started slowly, fell behind early, and didn’t look overly perturbed when Medvedev won the opener 6-4. And why would he? Everyone in the building knew that the real match was about to get underway. When Medvedev went down 0-40 in his first service game of the second set, it looked as if Djokovic’s plan was going to work like a charm again.

Except this time Djokovic didn’t break serve. The Russian fired off a forehand pass, Djokovic put an easy backhand into the net, and Medvedev held. Two games later, with Medvedev serving at 1-2, the same thing happened. Medvedev saved two more break points, one with a good volley and another with a brilliant down-the-line backhand. Foiled for the first time all tournament, and beaten by a better shot, Djokovic smashed his racquet until it was broken 10 different ways. He knew he was in for a fight.

“There was a turning point in the beginning of the second I feel like,” he said. “Some break points there, opening service games of Medvedev in the second set. There was some love-40. Just one shot here and there… I was very close.”

“Who knows the trajectory of the match if you would make a break in the second early.”

As it was, the trajectory of this match went in the opposite direction of all the others Djokovic had played here. It was Medvedev who imposed his will from that point on. He played virtually flawless tennis, hitting 16 aces, winning long rallies, and putting his passing shots at Djokovic’s feet.

We’ve talked a lot this tournament about the unusual and inventive games of young players like Leylah Fernandez and Jenson Brooksby, but Medvedev went them one better in the tactical-acumen department today. He changed speeds with his ground strokes constantly, forced Djokovic into errors with his hard slice backhand, and, ranging behind the baseline and lofting balls down the middle of the court, he gave the world No. 1 no openings or angles. Djokovic spent much of this match serving and volleying, which is a strategy of last resort for him.

Only when he reached championship point at 5-2 in the third did Medvedev flinch. He double faulted twice and rushed a forehand into the net. But he didn’t flinch again when he served at 5-4. Through two excruciatingly long rallies, Medvedev hung tough and fought off his nerves. When Djokovic’s last return of serve found the net, Medvedev dropped to the court and laid there like a “dead fish,” which is how he described it later. The Russian has his own way of doing just about everything, and now that includes celebrating a Grand Slam title.

With the defeat went Djokovic’s chance to become the first player since Steffi Graf in 1988 to win the Grand Slam. For now, he remains tied with Roger Federer and Rafael Nadal with 20 major titles each. The buildup over the last six months, and the two weeks of highly physical matches in New York, finally left him flat.

“I was just below par with my game,” Djokovic said. “My legs were not there. I was trying. I did my best. Yeah, I made a lot of unforced errors. I didn’t have—no serve really.”

Asked what he felt at the end, Djokovic said:

“Relief. I was glad it was over because the buildup for this tournament and everything that mentally, emotionally I had to deal with throughout the tournament in the last couple of weeks was just a lot. It was a lot to handle.”

“I was just glad that finally the run is over.”

There were two stories to this match: The contest between Medvedev and Djokovic, and the evolving relationship between Djokovic and the Open crowd.

Medvedev joined 2020 titlist Dominic Thiem in breaking through for his first major at Flushing Meadows.

In his first-round match, two weeks ago, the fans had rooted hard for his little-known opponent, Holger Rune. But the tide began to turn during Djokovic’s hard-fought win over Matteo Berrettini in the quarterfinals, when he demanded a reaction from the audience, and they responded with a roar. By Sunday, the Ashe audience was behind him in a way that it had never had been during his 16 trips here. They stood for him, they chanted his name, they did everything they could to lift him up. Finally, one game from losing, Djokovic cried on the final changeover, and he misted up again during the trophy presentation.

“I felt something I never felt in my life here in New York,” he said. “The crowd made me very special. They pleasantly surprised me. I did not know, I did not expect anything, but the amount of support and energy and love I got from the crowd was something that I’ll remember forever.”

“I mean, that’s the reason on the changeover I just teared up. The emotion, the energy was so strong. I mean, it’s as strong as winning 21 Grand Slams. That’s how I felt, honestly. I felt very, very special.

They touched my heart, honestly.”

Djokovic may be the greatest tennis player of all time, but he has never been the most popular. His detractors say part of the reason is that he wants to be loved too much. But is there anyone who doesn’t want to be loved, who doesn’t want the fans to cheer for him instead of the other guy, all the time? Tonight we saw what that love meant to Djokovic. He lost the biggest match of his career, even as he was winning over the biggest audience of his life.

Fans came to Ashe on Sunday to see the power of one player to make history. But as the cheers washed over a defeated Djokovic from the top of the stadium, it felt like we had seen something just as important: The emotional power that lies at the heart of this sport, and bonds us as players and fans. Djokovic has wanted that bond his entire career, and at 34, after his toughest loss, he got it.