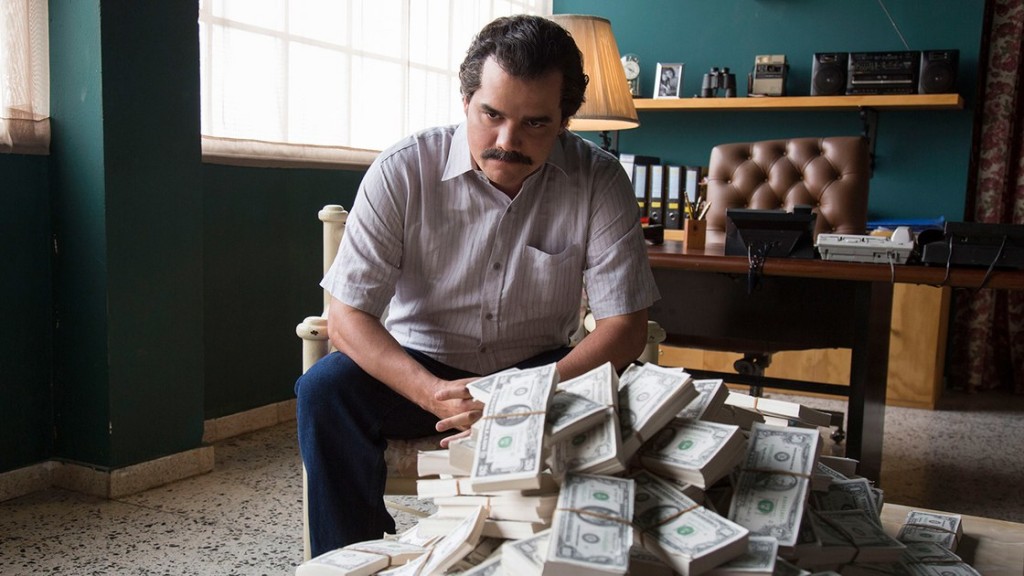 What ‘Narcos’ Gets Wrong About the War on Drugs

Steve Murphy wants you to know he’s not the bad guy in this story. He tells you so in the first episode of Narcos. Sure, he’s had to do some bad things, but you wouldn’t be so quick to judge him if you knew what it was like in Colombia, where everyone is either corrupt or incompetent, and “nothing goes down the way you think it will.” It’s the ‘80s. Cocaine is booming, and Murphy is a white man with a gun on the frontline of the drug war. His old DEA partner got killed in a sting-gone-sideways in Miami, so maybe that’s why Murphy feels okay about having sent a troupe of bloodthirsty Colombian police officers to shoot up a nightclub in Bogota. Now he’s inspecting the carnage, snapping evidentiary photos of bullet-riddled mafia hitmen and the random, suggestively clad dead girl on the floor beside them. “Good and bad,” says Murphy, in his vaguely Southern sneer, “they’re relative concepts.”

Narcos chronicles the rise of the Medellin Cartel and the U.S.-led manhunt to bring down its notorious kingpin, Pablo Escobar. Over the course of the next nine episodes, you keep waiting for it to find something more meaningful to say about this incredibly traumatic period in Colombian history than, “Morality—who the fuck knows, anyway?” Instead, the show speeds through a relentless “inspired by true events” succession of kidnapping, torture, rape, and murder with the same even-toned ambivalence as its aloof protagonist-narrator. (Steve Murphy on the Third World: “From 10,000 feet, Colombia was a paradise of untouched rainforest. But things were different on the ground.” Steve Murphy on the intricacies of anti-narcotics law enforcement: “In the world of drug dealers, you do what you think is right, and hope for the best.” Steve Murphy on the mystery of sin in an indecipherable universe: “Sometimes bad guys do good things.”) “Life,” cautions Murphy, standing outside the Bogota nightclub, “is more complicated than you think.” Narcos, unfortunately, is not.

Narcos, writes Grantland’s Andy Greenwald, “doesn’t demonstrate much aesthetic ambition.” It doesn’t approach its well-trafficked material through a new lens—like ESPN’s 30-for-30 documentary, The Two Escobars, with the narcofútbol phenomenon—and there’s nothing about the actual camerawork you haven’t seen done, and done better, in the Martin Scorsese picture of your choosing. The narcos themselves are less fleshed out than in the popular Colombian series, El Patrón del Mal, and the cops, Murphy and his womanizing, do-whatever-it-takes DEA partner, Javier Peña, are chain-smoking genre cliches with mustaches. Somehow, Narcos is at once less nuanced and less suspenseful than Mark Bowden’s journalistic account, Killing Pablo.

At best, writes Greenwald, Narcos “aspires to a verité-like flatness.” It’s shot on location in Colombia, with contemporaneous news footage worked into the “based on a true story” plotline. The real Murphy and Peña consulted on the production, having taken part in the actual mission that led to Escobar’s death. And while the accents may be atrocious—as Escobar, Wagner Moura espouses the infamous plata o plomo ethic (silver or lead, bribes or bullets) in a hybrid closer to his native Brazilian Portuguese than the distinctive Medellin paisa—the parts of the dialogue that should be in Spanish are. For an American TV show, that should probably count for something.

In the weeks since its critically acclaimed late August release on Netflix, Narcos has succeeded in marketing itself as a sort of high-budget History Channel reenactment. “Cocainenomics,” the six-part Netflix-sponsored interactive that went up on the Wall Street Journal’s website, purports to offer readers a detailed economic breakdown of the Colombian coke boom. A new three-part Vice documentary miniseries exploring “how Pablo Escobar’s legacy of violence drives today’s cartel wars” is also “presented by Netflix.” This is native advertising at its finest, from a studio whose business model demands nothing less. And if anything, the paid promotional content comes off as reserved next to the fawning outside coverage that’s followed. “That most of the story is true is fascinating” to The Guardian’s Brian Moylan. At Salon, Sonia Saraiya doesn’t let her “minimal understanding of this era in Colombian history” stop her from asserting that “the story sticks to the facts, and tries to offer as much context for them as possible.” A quick Q&A with Murphy and Peña is enough for Men’s Journal to uncover “the true story behind Pablo Escobar.”

Other drug war dramas can make varying claims to realism, but none has staked so much of its appeal on being perceived as literally accurate. To a certain kind of viewer—educated, “socially conscious,” finished Season 5 of The Wire and felt qualified to escort you on a walking tour of Westside Baltimore—Narcos is not simply entertaining but true. Narcos, as one Slate piece put it, is “exactly the portrayal of the drug war we needed.”

Once you get past the noirish overtones and jaded voiceover narration, though, Narcos is exactly the portrayal of the drug war we already get. Pablo Escobar is a bad person, and Murphy and Peña are essentially good, in spite of the bad things they occasionally have to do to kill the bad guys. Colombia is impossibly backwards, and most of the people who die there are anonymous, agentless, and poor—or in some other way deserving. Narcos is able to pass the banality of its politics off as an unflinching historical critique, but only because of how much the history it’s dramatizing has already been doctored to legitimize U.S. foreign policy. What little cynicism the show can muster serves to reaffirm the far more significant premises it accepts without question. It’s not propaganda in the strict sense, but Narcos may be more effective for it.

Narcos, for instance, shares with the U.S. government a vested interest in inflating the menace of Pablo Escobar. That’s not to discount the great many horrific acts for which Escobar was responsible, including the murder of hundreds, if not thousands. But here it actually is important to be relative. Escobar was neither the most powerful nor the most violent of his associates. His rivals in Cali had better connections to the national political structure and military. And his partner, Gonzalo Rodríguez Gacha, depicted by Puerto Rican actor Luis Guzmán as a dopey goon with a gun fetish, was a driving force behind the anti-communist death squads that would later plunge Colombia into one of the deepest humanitarian crises on the planet.

As Colombian journalist and conflict researcher Maria Teresa Ronderos explains in Guerras Recicladas, the idea of paying for the social cleansing of leftists with drug revenues was still new in Colombia when Gacha began importing Israeli and British mercenaries, in the early 1980s, to train the mafia’s soldiers in assassination, guerrilla warfare, and bomb-making. Elsewhere, however, the narco-counterinsurgency model was already being put into practice. From Argentina to Honduras, U.S.-backed militaries across the region were using narco-trafficking to wage the Cold War. Narcos credits Chilean dictator Augusto Pinochet with purging his country of drug dealers, thereby giving rise to the Colombian coke trade. But Pinochet was no exception, and cocaine first arrived in Colombia from Bolivia—where the military partnered with the drug mafia to overthrow the government in the Cocaine Coup of 1980—and Peru—where the military ran, and still runs, protection for coca shipments. Narcos makes no mention of the fact that, throughout much of the show’s hazy chronology, the Colombian syndicates were expanding their U.S. market on the strength of the drug-for-arms pipeline the CIA constructed to supply the Nicaraguan contras.

Gacha and other Colombian narcos, writes Ronderos, “learned quickly that if they aligned themselves with the anti-communist side of the [Colombian armed conflict], they’d face less obstacles” in conducting their business. The wisdom of those alliances would be borne out over the course of the following decades, as Washington poured ever more money, equipment, and training into a guerrilla counterinsurgency campaign that deployed paramilitary death squads as an extension of the Colombian military. The group that benefited most from this shadowy “para-state” nexus, the United Self-Defense Forces of Colombia (AUC), was made up, in large part, by disgruntled Medellin Cartel associates. After helping the DEA—and the Cali Cartel—eliminate Pablo Escobar, they picked right up where he had left off.

“At its core,” said the real Javier Peña, in one of his promotional interviews, the Pablo Escobar story is “a lesson in history.” But it’s not a lesson the U.S. government has cared to learn—as Peña approvingly pointed out, “Mexico is employing the same techniques we used to take down Escobar in their pursuit of El Chapo,” the fugitive drug lord—nor is it one that Narcos cares to teach. The show obfuscates, trivializes, or erases outright those aspects of history that disturb the comfortable fantasy of the drug war as flawed but well-intentioned, perhaps futile in the end but nevertheless necessary. “We need lies,” says Escobar, flying off to his self-constructed prison in episode 8, “when the truth is too difficult to believe.” One wonders who Narcos is trying to convince. 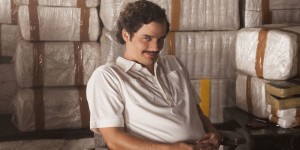 As the camera climbs the misty northern Andes in Narcos’s opening shot, a block of text appears on the screen. Magical realism, it reads, is “what happens when a highly detailed, realistic setting is invaded by something too strange to believe.” The problem, as Jimmy Johnson points out on The Hooded Utilitarian, is not that the blurb appears to have been lifted, without attribution, straight from Wikipedia. Or even that the show, in its ceaseless, “condescending racism,” is using one of the great literary contributions of the 20th century like an exotic backdrop. It’s that Narcos blurs the boundaries of fiction toward political rather than artistic purpose: to obscure a “rigidly orthodox” drug war discourse and the “imperialist logics” that buttress it.

“There’s a reason magical realism was born in Colombia,” Murphy narrates. In his 1982 Nobel Prize acceptance speech, Gabriel García Márquez, the late Colombian writer who popularized the genre, came far closer to identifying what that reason is. Márquez began his speech with a survey of mythical tellings the Spanish reported back from their first adventures in the Americas. From there, he continued to trace this thread of incredible occurrences through the larger-than-life despots of the turn of the century banana republics, all the way up to the present, and the haunting “disappearances” of the dirty wars unfolding throughout the region. “The size of our solitude,” Márquez told his Western audience, is the distance between what is real and what is defined as such, the “lack of conventional means to render our lives believable.”

Contrary to what Narcos would have you believe, Colombia is not supernatural; the forces that shape it are complicated but perfectly knowable. The dissociation comes from imposing outside narrative conventions on a reality that refuses to conform to them. “The war on drugs is a concept invented and promoted by the U.S. government,” writes investigative journalist Dawn Paley, not an actual policy that has ever been enacted. The very word ‘narcotics,’ writes historian Suzzana Reiss, is a “political and historical construction, rather than a neutral descriptive category.” The mere act of discussing the world in these terms creates distinctions that do not objectively exist—between peasant farmers and criminals, the people who move a product and the governments that supposedly oppose them. In Colombia, there have been wars fought for drugs and wars fought with drugs but never a war fought against drugs. That Narcos pretends otherwise is the only thing magical about it.