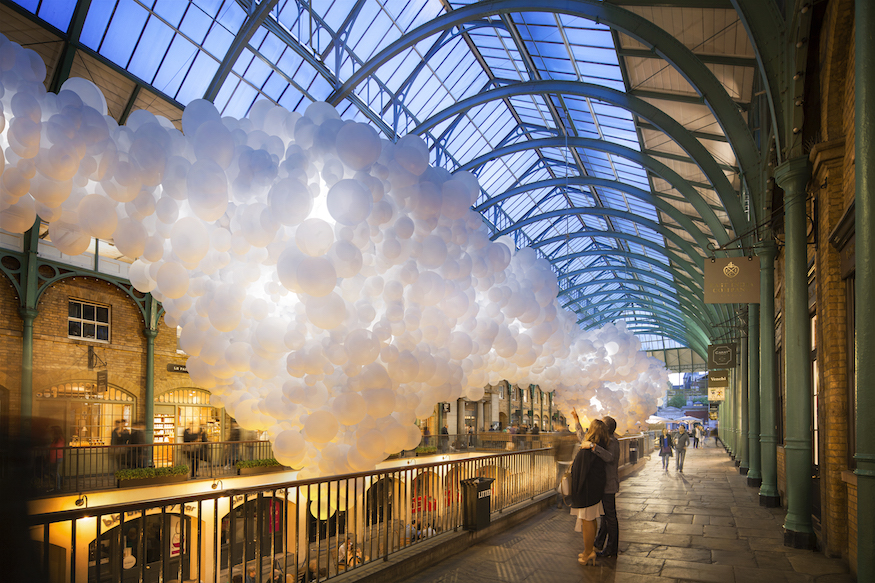 Covent Garden Market has seen a range of quirky art installations under its roof over the past few years from Jeff Koons’ giant inflatable rabbit back in 2009 to the gravity-defying floating house by Alex Chinneck last year.
This year it’s the turn of French artist Charles Pétillon, who is presenting his first public art installation (and first ever work outside of France) called Heartbeat. The artwork consists of 100,000 giant white balloons and will fill the grand interior of the 19th century Market Building from Sunday 27 August for an entire month.
Stretching 54 metres in length and 12 metres in width, the cluster of white balloons will be lit by a pulsating white light which symbolises the beating of a heart and reflects the energy and dynamism of the area. As the artist says:
The balloon invasions I create are metaphors. With Heartbeat I wanted to represent the Market Building as the beating heart of this area — connecting its past with the present day to allow visitors to re-examine its role at the heart of London’s life.
Alongside the installation, there will be a pop-up gallery on the Piazza at Unit 5, Royal Opera House Arcade, showcasing Pétillon’s series of Invasions photographs as well as some of his other work. Heartbeat is also part of London Design Festival 2015.